HomenewsElectric VehiclesWho’s going to pay for the future of mobility? (This Article is written By Deloitte)

Who’s going to pay for the future of mobility? (This Article is written By Deloitte)

Who’s going to pay for the future of mobility? – Insights from Deloitte’s 2020 Global Automotive Consumer Study

To encourage consumer uptake of advanced vehicle technologies, the automotive ecosystem still has some work to do, including figuring out just who will build and pay for electric vehicle charging infrastructure.

STAKEHOLDERS up and down the automotive value chain are pumping billions of dollars into making connected, autonomous, shared, and electric vehicles (EVs) a reality. In today’s climate, most automakers are so concerned about being left behind, they’re frantically trying to keep multiple research and development (R&D) balls in the air at the same time. But the cost of juggling multiple programs is enormous, and trying to do it at a time when most industry analysts agree that the sales upcycle the industry has enjoyed for a decade is all but exhausted is next to impossible.

High R&D costs are one likely reason some automakers have recently posted softer financial results,1 and they may also be prompting automakers toward cost-cutting measures, such as rationalizing their global manufacturing footprints. Further, high R&D costs could explain, at least in part, why some manufacturers are contemplating their exit from entire vehicle categories, as shedding unprofitable segments would allow automakers to spread their R&D budgets a bit further among those that remain.

Another way automakers are seeking to control rising R&D costs is by actively looking to acquire technical expertise rather than developing it in-house. Some original equipment manufacturers (OEMs) recognize that developing advanced technologies themselves would take far too long and yield less than successful results. Accordingly, many automakers are intensifying efforts to pursue technology startups in global automotive innovation hubs, such as Israel.

Yet another approach is to forge strategic partnerships to spread the cost—and risk—of developing advanced technologies across a greater number of players. Indeed, some OEMs are trying to plug visible gaps in their R&D programs by leveraging expertise from rival companies. The number of such partnerships is growing daily, challenging the traditional concept of competitive positioning. In fact, some recent headlines suggest that the rise in partnerships to pool technical expertise may be a precursor to renewed industry consolidation.2 Along with this, some automakers, especially those that have been slow to get in the advanced technologies game, may undertake significant rationalization efforts—particularly in their supply base—as they come under increasing pressure to remain relevant.

You can build it, but will they come?

Underlying automakers’ massive R&D investments is the assumption that consumers will actually pay for these advanced technologies when they appear on the market. However, results from the 2020 Deloitte Global Automotive Consumer Study suggest that achieving a return on invested capital for new technologies may be more difficult than some automakers think.

Consider the curious case of the autonomous vehicle (AV). Three years ago, media headlines and industry stakeholders were tripping over each other to herald the imminent arrival of commercially viable AV fleets. But since then, the projected timeline for the first commercial AV launch has moved further and further back, with some industry observers now wondering if it will ever happen.3 More to the point of this article, results from our automotive consumer survey suggest that consumer interest in AVs has stalled. In last year’s survey, just under half of respondents in several countries believed that AV technology will not be safe,4 and this year’s results paint a very similar picture. Except in India and China, where the percentage of people that think autonomous vehicles will not be safe has actually gone back up. What’s more, this year’s survey found that most consumers in Germany (67 percent) and Japan (61 percent) are not willing to pay more than approximately US$500 extra for AV technology (figure 1). 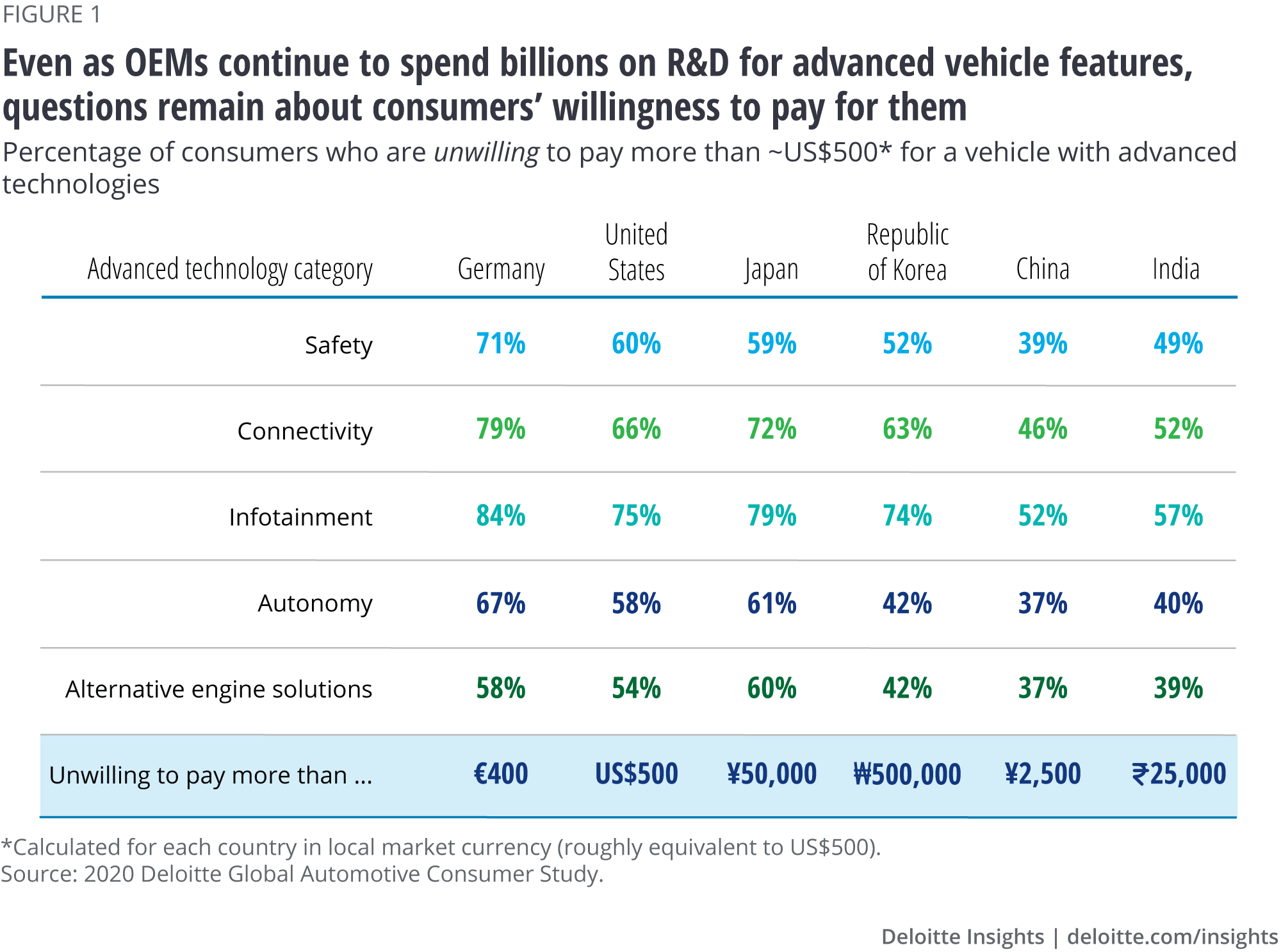 This unwillingness to pay for AV technology is part and parcel of a more general lack of willingness among consumers in developed economies to spend extra for other types of advanced automotive features. For instance, close to half of the survey respondents in Germany, and a respectable fraction of those in the United States (31 percent) and Japan (28 percent), indicated they would not pay more for a vehicle that could communicate with other vehicles and with road infrastructure to improve safety. That said, unwillingness to pay extra for connectivity was much lower among consumers in India (6 percent) and China (5 percent). This may be because consumers in more mature automotive markets have been trained for many years to expect manufacturers to introduce advanced technologies at little or no additional cost as a way to differentiate themselves in the market. In developing countries, where a much larger proportion of consumers are first-time vehicle owners, similar expectations about how vehicles are equipped may not have had a chance to solidify.

The story is roughly similar when it comes to advanced powertrain technologies. Fifty-eight percent of German survey respondents said they would not pay roughly the equivalent of US$500 extra for a vehicle with an alternative-fuel engine; 54 percent of consumers in the United States said likewise. On the other hand, only 37 percent of Chinese survey respondents said they would not pay more than about US$500 extra for an alternative powertrain, likely reflecting the significant growth in China’s new-energy vehicle market over the last few years. But even so, Chinese consumers’ interest in alternative-fuel vehicles may be starting to wane, perhaps in response to the government’s decision to pull back on incentives.5 Only 57 percent of this year’s Chinese respondents said that they would most want something other than a traditional gasoline or diesel-powered vehicle in their next vehicle (figure 2), down from 65 percent in 2019. 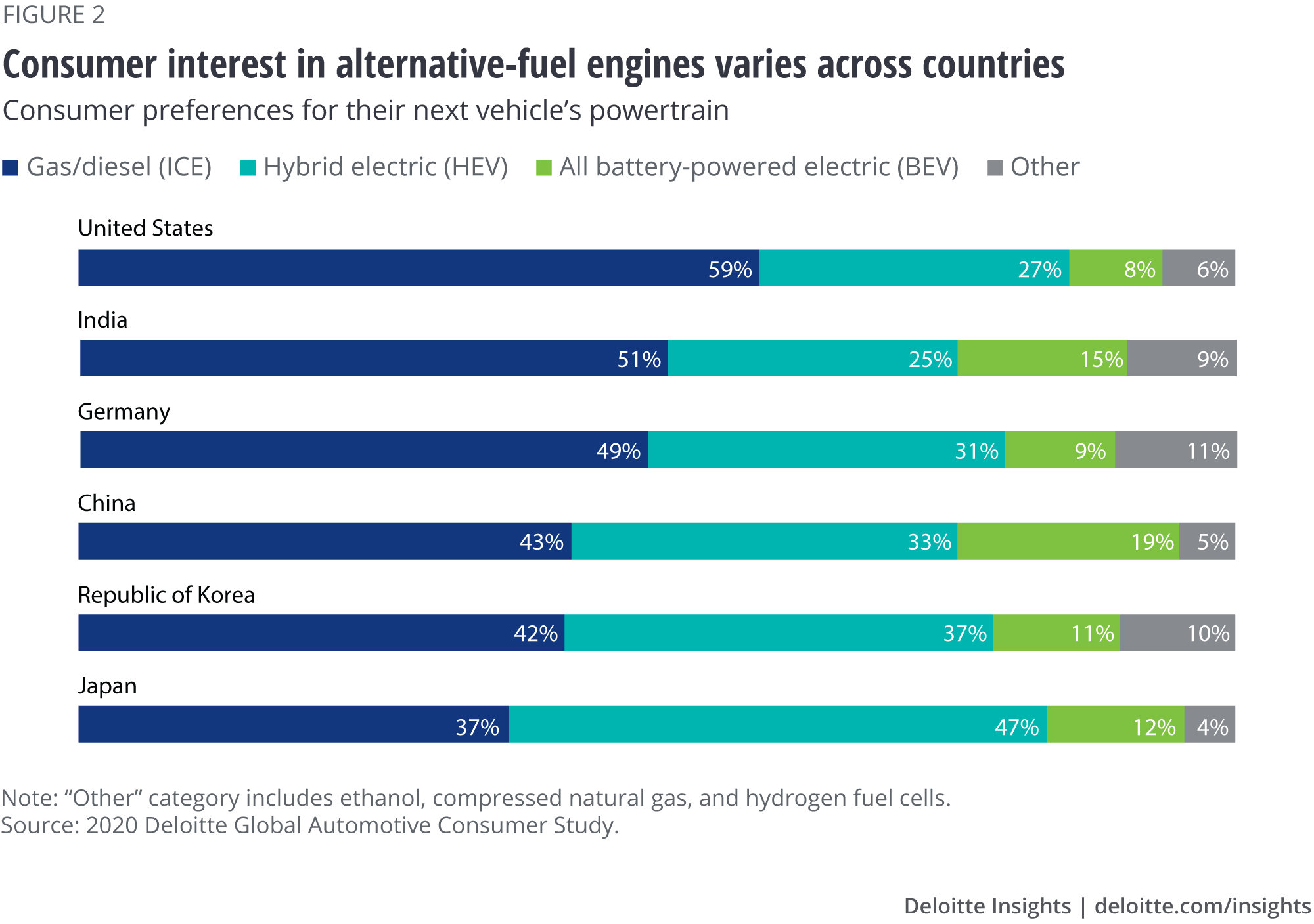 Automakers still have reason to invest in developing new powertrain technologies, however. Interest in alternative-fuel vehicles is rising in several other markets. Fifty-eight percent of consumers in the Republic of Korea said they would most prefer their next vehicle to have an alternative fuel engine, up from 43 percent in 2019. Fifty-one percent of respondents in Germany said the same, up from 37 percent a year ago. Even in the United States, where a combination of loose environmental policy, low fuel prices, and tight incentives have kept interest in hybrid and fully electric vehicles largely at bay, 41 percent of consumers said they are actively considering an alternative-fuel vehicle in the future, up from only 29 percent last year.

EV charging infrastructure: Someone needs to own it

For EVs to really take off, consumers should be convinced that they won’t be left at the side of the road with a dead battery. Range anxiety and the availability of charging infrastructure are two of the top three concerns holding people in many countries back from purchasing an EV—even though these fears are becoming less justified as the technology improves with every passing year.

EV technology has progressed to the point where an EV’s battery capacity would satisfy the vast majority of consumers’ actual transportation requirements. In fact, our study results show that even though 41 percent of US consumers believe full battery electric vehicles should have a range of at least 300 miles, the average vehicle owner travels just over 27 miles per day. However, in the absence of large, exogenous factors such as a fuel price shock, a shift in government policy or incentives, or even a diesel scandal, getting consumers over their collective fears regarding EVs remains difficult. It doesn’t help that EV manufacturers and infrastructure providers face the “chicken and egg” problem of whether to encourage demand by installing charging infrastructure first, or wait until after demand has risen to a certain point before investing significantly in a charging network.

However, the biggest problem may be that no one in the automotive ecosystem seems especially eager to take responsibility for the kind of holistic charging infrastructure investments that will likely be required. Some vehicle manufacturers have stated that they are not in the business of selling fuel, although some pioneers have been forced into the charging space to make their overall business strategy viable. For their part, traditional fossil fuel providers are happy to maintain the status quo. Government agencies are channeling some funds to specific projects to promote innovation, but these amounts are nowhere near the overall investment likely needed.

When put to consumers, the question of who should be responsible for EV charging infrastructure becomes somewhat clearer. Thirty-eight percent of consumers in Japan believe that it is the EV manufacturer’s obligation to build out the necessary charging network, and many in the United States (36 percent) and India (34 percent) hold the same view. However, opinions in the Republic of Korea and Germany are decidedly different. In the Republic of Korea, only 24 percent of consumers said that the OEM should be responsible for building charging stations, and half thought it should be the government’s responsibility. Moreover, German consumers were roughly evenly split in placing the responsibility on OEMs, government, existing fuel companies, and electric utilities. As we’ve seen in some other industries, the question of establishing a viable, holistic EV charging network may open the door to a public-private partnership (P3) that would have the resources to scale an appropriate response to this issue.6

What about fuel taxes in an EV world?

To date, one of EVs’ most compelling benefits has been essentially free or very low-cost fuel. But governments, of course, have an interest in maintaining the considerable revenue stream currently generated by fossil fuel taxes. In fact, the level of refueling taxes applied in Germany (46 percent), Japan (47 percent), and India (49 percent), have translated into a substantial and stable source of government revenue over several decades. Even in the US, a loss of the 19 percent tax applied to each gallon of gas pumped would be a considerable gap to backfill. Therefore, the more that global governments encourage EV ownership through incentives and other stimulants, the more they should figure out how to either tax electricity to earn revenue comparable to that generated by fossil fuel taxes, or come up with alternative revenue sources to fill the void. These alternatives could take the form of user fees or other, similar mechanisms, but many of these ideas are very unpopular with consumers.7

At the end of the day, both automakers and governments should find new revenue streams to fill potential gaps left by an evolving industry. Even though some of the technologies now being developed may take years to become commercially available, considering the implications now may yield significant benefits down the road.